Greenworks is committed to providing excellent battery-powered equipment for gardeners, homeowners, and commercial users. The company believes that batteries are a huge part of the future, and perhaps they could take over. With the advancements in battery technology, Greenworks has developed higher than the 18-volt industry standard.

Surpassing several of its competitors, Greenworks has battery-powered equipment that delivers incredible performance. Since day one, the company has been a proponent of batteries. Today, they offer different types of equipment in various voltage ranges, starting from 24 volts to 82 volts.

Greenworks is under Globe Group, which is relatively new to the industry compared to other companies out there. However, Globe Group has become one of the youngest firms to become frontrunners in battery equipment production.

Greenworks, officially known as Greenworks Tools, is a brand founded in 2007. The vision behind its inception is to lead the market industry using lithium-ion technology. The brand started introducing its batteries and outdoor powered equipment in the same year.

Three years later, Greenworks put out a corded power equipment line for outdoor use. The reason behind those products is that the existing customers wanted other options. Some required more power but without noise and fumes that are a common occurrence with other power tools.

In 2011, Greenworks presented a pressure washer with low noise, vibration, and absolutely no fumes. After two years, another product was out in the market, becoming one of the most popular from Greenworks. It was the dual blade lawn mower. From March 2013 to April 2016, Greenworks launched the higher voltage items, including the 82-volt commercial lithium-ion products. 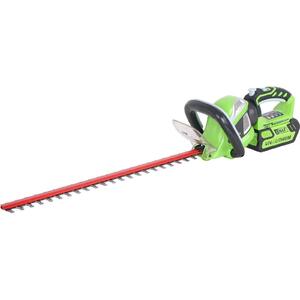